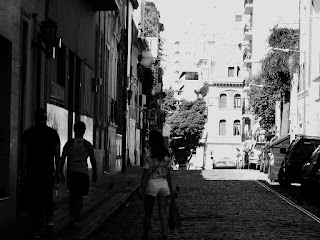 Calle Estados Unidos is a fascinating street of Buenos Aires. If we follow it out to the west beyond barrio Caballito, our tree-lined calle fades into calle Valle, only to end abruptly eighteen blocks later at calle Miró (just short of LaBaldosa Milonga).

But, for the purpose of our adventure we shall walk east taking us on a journey through Boedo, Monserrat, San Telmo and finally into Puerto Madero. 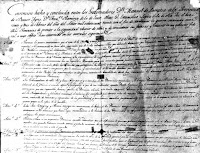 Following the defeat of the 'Unitarians' by the 'Federals' in 1820, the new ‘United Provinces of the Rio de la Plata’ was recognised by the USA, and Calle Estados Unidos was later named in their honour.

It is one of the city’s greener streets bearing jacaranda and tipuana tipu trees along its length. In spring and autumn the pavements glow with pink and yellow petals. With a relaxed feel, preserved architecture, and an intimacy, it presents as a favourite street to walk.

Save for the inexplicable dog-leg at , Estados Unidos is a straight, one-way grid road running west to east bringing light traffic into the city. It is sandwiched between the busy east to west roads of Independencia and Carlos Calvo which take traffic from the centre. On the whole, incoming traffic seems to prefer the more versatile roads of to the north and with its wide open carriageway to the south. 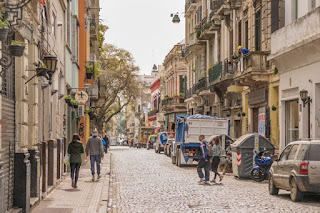 Estados Unidos is unremarkable before we reach Av Boedo, where the street passes one block to the north of DeQuerusa Milonga at Carlos Calvo 3745, skirting the gardens of Plaza Mariano Boedo, and running three blocks north of Club Gricel Milonga at La Rioja 1184.

At Pres Luis Saenez Pena you are but one block from Casa Bella (Independencia 1502), a worthy detour to an emporium selling everything from a portable BBQ to a full size asado.

At Tacuari 905 is our first San Telmo milonga ‘Chanta 4’, and at Estados Unidos 802 you will encounter the Museo Argentino del Titere (puppet museum).

A stop at Estados Unidos 617 is a must. Here you will find Walrus Books, one of the more interesting stores in Buenos Aires, stocking the widest selection of foreign books in the city. 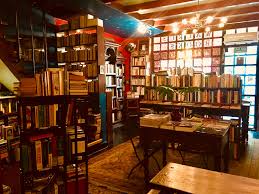 Further on look out for the street art at 553 and proceed down to Peru, where a few steps right will take you to The Gibraltar at 895, a very popular San Telmo pub. Thirst quenched, continue on to La Brigada at 465. 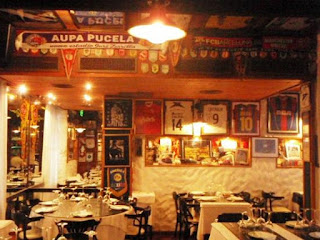 La Brigada is said to be one of the best steak restaurants in Buenos Aires, combining eating with football. But this place is no slouch. Booking is essential, as is a well-charged credit card. It is all worth the effort and expense, setting almost unattainable standards of cuisine and service for its rivals.

Across the road from La Brigada is the Mercado de San Telmo, the city’s most iconic covered market containing restaurants, cafes, antiques, hardware, grocers and butchers.

Freddo (Defensa 901) might prove to be a suitable stop for ice cream, but for morning coffee, lunch or afternoon cocktails continue down to Café Rivas at 302. This has to be a favourite for those visiting San Telmo. Intimate, smart and friendly, Café Rivas ticks all boxes for those seeking a midday snack or full evening meal. For vegetarians, continue down to Balcarce, turn right to 958 where you will find Naturaleza Sabia. 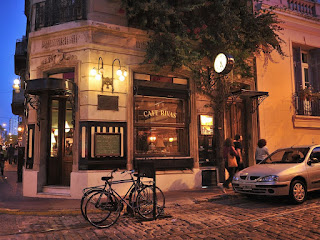 Beyond Balcarce, Estados Unidos descends to Av Paseo Colon with the dramatic frontage of the Engineering faculty on your left and the gorgeous Ministry of Agroindustry to the right. Walking between them leads you towards Av Alicia Moreau de Justo, the gateway to Puerto Madero where Estados Unidos gives way to Rosario Vera Penaloza and the Rio Darsena Sur. 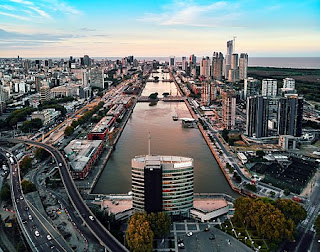 photo by Cecilia Pastore, the photographer of Buenos Aires

When the chance arose to take a sabbatical from work as an English barrister , travelling to dance Argentine tango in Buenos Aires seemed to be an inevitable choice. Equipped with a rucksack, credit card, the address of an apartment and three words of Spanish, I travelled nearly 7,000 miles to arrive as a rookie tanguero. This blog describes that journey, and the ones that followed, both in tango and in life.
Follow me on Twitter: @twiststephen or visit my website.