Strictly ageist - and the Bailey effect 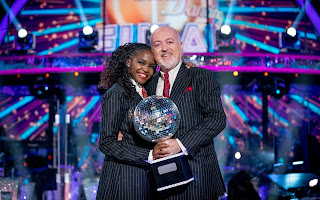 In 1970, whilst at university in , I was talent spotted by former national dance experts Edna and Denis Murphy. It was not a triumphal moment. Having mastered country dancing as a school boy, I was coping with the ballroom class – until I came to the corners – where fear almost overtook experience.

Edna and her brother had failed to find a suitable male competitor in the advanced class, so in desperation their scout peeped into the beginners’ group and caught sight of me on a ‘straight stretch’. I was chosen, perhaps for my perseverance, and after intensive training, mastered the corners and danced competitively on the national stage.

After 43 year old Ranvir Singh exited the competition in the semi-finals, Coral’s betting odds on Bill Bailey to win shortened to 8/11 in the belief that he would inherit Ranvir’s mid-life groupie following. And, it seems they were right.

As an ageing tanguero, I watched Strictly with a fairly discerning eye, finding myself in a lonely camp (so to speak) with 55 year old Craig Revel Horwood – rather than 39 year old Motsi Mabuse, 60 year old Shirly Ballas – or indeed the ‘from a distance’ 65 year old Bruno Tonioli.

But this competition was not about age, nor, it seems, about dance ability. It showcased the contestants’ effort, commitment and improvement – or to put it in Strictly cliché, ‘their journey’.

In the case of Bill Bailey this was quite remarkable, leaving aside his age. What Bailey undertook was a root-and-branch investigation of each dance form he was asked to perform – learning its history, culture, and the secret elements of excellence that go beyond simple technique. He became a part of the dance, he disclosed his humanity, and achieved a milestone of its development.

When competitors internalise the essence of a dance, their commitment shines through the dance form, albeit in a 90 second vignette. It recounts their struggle, moments of exasperation, exhaustion and defeat, making their ultimate triumph more sensational. And this is what the great British viewer saw – an ageing comic transcending expectation with sheer joy of dance. In my book – a worthy Strictly winner.

photo by Cecilia Pastore, the photographer of Buenos Aires

When the chance arose to take a sabbatical from work as an English barrister , travelling to dance Argentine tango in Buenos Aires seemed to be an inevitable choice. Equipped with a rucksack, credit card, the address of an apartment and three words of Spanish, I travelled nearly 7,000 miles to arrive as a rookie tanguero. This blog describes that journey, and the ones that followed, both in tango and in life.
Follow me on Twitter: @twiststephen or visit my website.